A man that hath friends must shew himself friendly: and there is a friend that sticketh closer than a brother.   (Proverbs 18:24)

Over the past 2 decades, due to active membership in the Norwegian Society of Texas, a family history-promoting organization that has chapters in various pars of the Lone Star State  (see  https://www.norwegiansocietyoftexas.org/ ), my wife and I have experienced the truth of Proverbs 18:24.

The semiannual meeting of the Norwegian Society of Texas, called the “Althing” (named for the famous annual national assembly of Iceland), transpired last Saturday, in Clifton, a rural Texas-hill-country town (nicknamed the “Norwegian capital of Texas”).  While attending the Althing, I composed, and later presented, this limerick:

Norwegians at Clifton did meet,

In misty rain, not snow or sleet;

Time to plan the next year,

[NOTE: the rosemåling (above) mantel was painted by Norwegian native Mimi Fossum; this artwork is displayed in the historic Ringness House of Bosque County, Texas.]

A Secret Agent Recalls How RAF Bombers Sunk the TIRPITZ,  Illustrating the Need for Reliable Eye-Witnesses, for Knowledge about Past Events 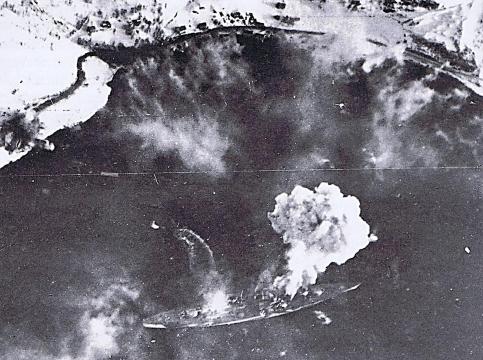 How was the German battleship Tirpitz sunk, during World War II?(1)   Also, regarding a completely different part of world history, how can we accurately explain the etiology of fossils, as the remains of once-living creatures from earlier epochs of Earth history?

To know the certainty of historic facts, especially non-repeating events that are no longer observable to us (or to anyone else), must we have an eye-witness report?  In a word, yes — this is basic forensic science.

After the fact, historic causes routinely leave behind physical effects, often with observable characteristics (such as fingerprints, tire or shoe tread impressions, blood spatter patterns, nuclear DNA, mitochondrial DNA, etc.) that can provide reliable inferences about what occurred, earlier, at a specific location.(2)

Yet what is the underlying “bread and butter” of forensic science?

Carefully examining physical effects in the present (perhaps with a magnifying glass, like Sherlock Holmes, or with more advanced technology), produced by physical causes of the past, is extremely helpful for learning about past events.

However, for complete accuracy, there is nothing that adequately substitutes for a reliable eye-witness. Reliable eye-witnesses can report relevant observations of past events—about who, what, where, when, how, and why—verifiable clues needed for understanding or solving a mystery about what really happened, including “whodunit”.   (To be “reliable” a witness must be competent, honest, accurate, able to observe what occurred (and observant about what is observable), able to remember what was witnessed, and able to report it with perspicuity and relevant detail.)  Sometimes an eye-witness report provides “minor” details of information that has “major” ramifications for reconstructing a series of causally related occurrences.(2),(3)

Eye-witness reliability relies upon honesty, opportunity to observe, accurate memory, and accuracy in reporting observations. These forensic evidence principles apply to the challenging tasks of reconstructing unique events of the past, because past events (unless recorded) can’t be seen in the present — whether those events occurred during a war, or during a global flood.

Mrs. Scott’s history was reviewed by a Norwegian immigrant friend, Tromsø native Mimi Fossum, who served in the Norwegian resistance as a teen-aged spy during World War II.  Concurring with the book’s overall accuracy, Mrs. Fossum recalled how the Tirpitz‘s “ammunition storage” was bombed by British Lancasters [on Sunday, November 12th of AD1944] that “snuck thru a gap in the mountains,” after a prior attack by Lancaster bombers had braved a “wall” of anti-aircraft fire, without a “good hit”.(1),(4)

Mrs. Fossum ended her handwritten memoir with: “I know. I was there.”(4)  Of course, some of what happened then (fall of AD1944), to the Tirpitz and nearby, could be inferred from physical effects (e.g., Tallboy bomb craters on land or under the sea) of the repeated bombings there. However, as in all forensic investigations, for some facts you need a reliable eye-witness.(3)

But what about the mixture of oceanic/tidewater animals, found in fossiliferous rock layers, that also contain land-roaming dinosaur remains? Why are land-based reptiles sometimes found buried in mud together with the likes of squid, shrimp, mussels, lobsters, scallops, oysters, clams, sturgeon, flounder, herring, and orange roughy fish?

Physical evidence can provide part of the explanation – but only part. To make adequate sense of the now-observable “what” there needs to be some kind of reliable eye-witness report on the no-longer-observable “how”.(5)

So, can we know what caused such physical effects, observable today in sedimentary rock layers? In a word, yes—but only if we rely on Genesis chapters 6-9, the perspicuous and inerrant report given – to us – by the global Flood’s only perfectly reliable eye-witness, God Himself.(6)

(4) Personal correspondence from Mimi Fossum, Tromsø (Norway) native, whose attention to visual detail is demonstrated by her many Norwegian rosemåling paintings.  Mrs. Fossum formerly belonged to the Viking chapter of the Norwegian Society of Texas (“NST”); now she belongs to Snorre chapter of NST.  It was my privilege, a few years ago, to be tutored in Norwegian rosemåling painting by Mimi Fossum (see example of my painting below).