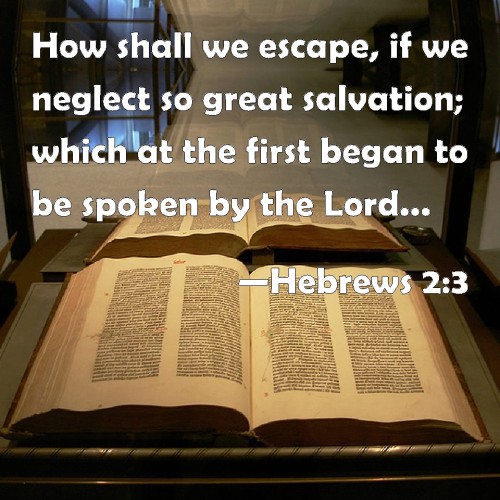 How shall we escape, if we neglect so great salvation; which at the first began to be spoken by the Lord, and was confirmed unto us by them that heard Him?  …. See that ye refuse not Him Who speaketh; for if they escaped not who refused him who spake on earth, much more shall not we escape, if we turn away from Him Who speaketh from heaven.   (Hebrews 2:3 & 12:25)

God’s truth demands a response.  A response to God’s revealed truth is either honest or dishonest.  There is no middle ground — when it comes to moral accountability for the truth that God gives unto each of us:   either we receive it as lovers of the truth, or we reject it while clinging to worthless lies (2nd Thessalonians 2:10).

PUSHING  BACK  TRUTH  INVITES  A  MISERABLE  LIFE  (AND  WORSE  AFTER  THAT)

For us abundant life   is appointed,

Yet for some its receipt   gets disjointed;

Some push back, aloof;

So in life they fail,   disappointed.

God’s highest revelation of Himself, of course, is the Bible, the Scriptures. The Holy Bible is a form of verbal communication. The text of the Bible—every letter, every jot-and-tittle—is inspired. God has promised to preserve the text. It’s not just a matter that He inspired it so many years ago and it was lost. He promised that the entire Bible would be preserved.

The Holy Bible, from Genesis through Revelation, is about who JESUS is, and what He has done since He created the heavens and the earth—with special attention to His redemptive role as the promised Messiah.  Christ Himself said, “Till heaven and earth pass, one jot or one tittle shall in no wise pass from the law, till all be fulfilled” (Matthew 5:18).

God preserved it, He transmitted it, and He did it in a way that is similar to the reproduction and distribution of seeds. In fact, many times in Scripture the Word is compared to seeds.  (See Matthew 13:3-23.)