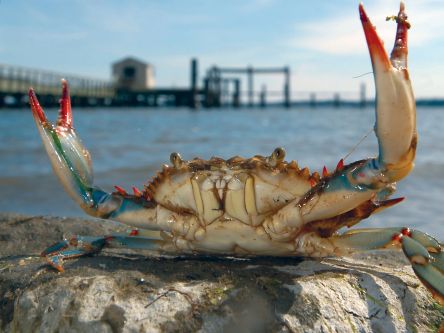 Last summer, in Baltimore, I enjoyed eating “Chesapeake Bay blue crab”—but was that what I actually ate? Why am I suspicious?  Blue crab, the Chesapeake Bay’s most iconic edible species(1), also appears to be its most impersonated.

A report released April 1 [2015] … found that 38 percent of crab cakes labeled as local on menus in the region were made of an entirely different species of crab, predominantly one imported from the Indo-Pacific region.  In Annapolis and Baltimore, nearly 50 percent of “Maryland” and “Chesapeake Bay” crab cakes were mislabeled.(2)

Before getting crabby about such false advertising (a type of bait-and-switch deception), such crustacean counterfeiting should be verified.  How can portunid pretenses be proven?

“I’ve put a lot of seafood in my purse over the last few years,” said Dr. Kimberly Warner, author of the report(3) … [referring to] crab cake samples that she and other testers collected [and] shipped to a lab in Florida that determined whether the cakes contained blue crab, Callinectes sapidus, and, if not, which species were used instead.  Warner said the fraud rate of 38 percent is a conservative estimate. … Mislabeling “is being done because it’s easier to sell a Maryland crab cake than one from the Philippines or Vietnam” [said Steve Vilnit, of Maryland’s Department of Natural Resources].(2)

Dr. Warner lamented that bogus brachyurans are part of a treacherous trend of tricking taste-buds:

Maryland’s favorite seafood dish is not safe from a bait and switch. When diners are expecting the fresh, distinctive flavor of the Chesapeake blue crab, they may instead be served a completely different species, shipped from as far away as Indonesia. … This mislabeling rate is consistent with Oceana’s previous studies on fish and shrimp. In 2013, Oceana found that one-third of more than 1,200 fish samples were mislabeled according to [USDA] guidelines. We also found 30 percent of shrimp samples to be misrepresented to consumers in a similar study in 2014.(3)

Many restaurants, buffets, and sushi bars are swimming in similar seafood scams.  Piscatorial masquerades include pollock playing cod, icefish as anchovies, tilapia as grouper, rockfish as red snapper. Customers, who eagerly eat what is falsely advertised as “albacore” (or “white tuna”), may experience a digestive insult: the look-alike meat of escolar fish (a/k/a “snake mackerel”) is wax-loaded and promptly produces a blasting vermillion diarrhea.

Yet there are worse bait-and-switch scams to warily watch out for, such as “creation apologetics” ministry mislabeling. Not all that is called “Biblical” origins science is genuinely true-to-Genesis.

Some unfaithful-to-Genesis organizations overtly disclose their “creation-by-evolution” doctrines. However, most do not conspicuously admit it, when compromising the Bible’s record of origins.

But you can recognize real messages, of ministries or “experts”, by their compatibility with Genesis.

Does the advertised “creation” teaching follow the uniformitarian dogma (and eons of “deep time”) of deists Charles Lyell and James Hutton?  Is it closed-Bible deism, wedged under another name, such as “Intelligent Design Movement”?  Embracing millions/billions of years means sacrificing Genesis truth – a “huge loss” – the high price for listening to a “wolf-mouth”.  Does the so-called “Christian apologetics” teaching, like the syncretism of William Lane Craig and Norm Geisler, incorporate Monsignor Lemaître’s “big bang” theory?  Does it presuppose death before Adam, like Alexander Winchell (or William Dembski), within some kind of pre-Adamite “hominids-morphing-into-humans” scenario?  Or, does it promote the animistic “natural selection” idolatries of Charles Darwin and Thomas Huxley?  Or does it do the equivalent, defensively, by trying to shield “natural selection” sophistry from debunking, proffering “genes-in-magic” bluff-and-bluster substitutes for real-world genetics?  (See 1st Timothy 6:20.)

Amazingly, as some atheists whisper their doubts about the bait-and-switch mantra “natural selection”, de facto theistic evolutionists(4) zealously defend “natural selection” as if it were a Hindu’s sacred cow or Roman Catholicism’s “sinless” Mary (Isaiah 8:20).  Where are the Berean creationists?

So how should we then live – and discern between true and false?  When scrutinizing the true ingredients—crab or shrimp or tunafish—in seafood cuisine, forensic genetics can detect the telltale DNA of the seafood actually sold. However, when scrutinizing whether an “apologetics expert” is truly a Biblical creationist, compare what those “experts” teach, specifically, with what the authoritative text of Scripture teaches (Acts 17:11).

(4)For example, in an ongoing (and  tragic) argument with an under-educated “natural selection” defender/advocate, on September 4th of AD2012, I wrote the following: “At the risk of being misinterpreted as simplistic, please note that a further complication of the peer review process [which all-too-often amounts to only a veneer-review process] is the simple fact that neither you [as an astronomer] nor [your cell biologist ally] have a forensic science expertise background.  Neither of you have served as a trial judge, making what are called ‘Evidence Rule 403 calls (mentioned below], i.e., to critically reject — or to approve — the usage of ‘conventional’ terminology as to its communication accountability when describing evidence, as I have since AD1996.  In other words, if we compare the creation-vs.-evolution debate to an ongoing courtroom contest, — and at times it can be educationally helpful to do so, — it makes sense that an advocate’s deceptive usage of terminology should be spotlighted and labeled for what it is, deceptive, — such as when a party tries to use bait-and-switch wordplays on the jury.  (It’s not just evolutionists who do this; e.g., Emergent Church pastors use misleading terminology all the time.)  Thus, the specific jargon at issue (i.e., ‘natural selection’) does involve biologists, to be sure, — but the thrust of the apologetics perspective is that how conventional terminology is used often indicates truth-vs.-falsity reliability (regarding the information or concepts being represented).  It is the accurate-vs.-misleading communication accountability issue that benefits from a forensic perspective, in order to expose how evolutionists use terms that are confusing and likely to mislead.   . . . Ironically, my main problem with the specific phrase ‘natural selection’ is linked to instances when I was required, as a judicial officer of the State of Texas, to make ruling that applied Evidence Rule 403, which is a rule that is used (inter alia) to bar otherwise-admissible evidence (including well-established professional jargon) if the tendency of that specific jargon is to be so inherently misleading that whatever communicative value that it may have, as industry-accepted terminology (to “insiders”), is outweighed by its semantic tendency to confuse communication about the relevant underlying facts to outsiders, — rather than to transmit accurate, relevant, precise information.  Typically a jargon objection is sustainable, under an ‘Evidence Rule 403 call’, when the objectionable term itself does not clearly match the underlying reality that it is supposed to represent, such that usage of the jargon (even though it may be ‘accepted’ jargon in the industry) is likely to mislead and confuse the evidence presentation.  An example of this is the case of Godard v. Alabama Pilot, Inc., 2007 WL 1266361, *1 (S.D. Ala. 2007), where the federal judge disallowed the use of the professional jargon “seaman” because its semantic ambiguity was interfering with the inquiry’s analysis of the core evidence.  . . .   [please review and show due respect for my earlier article posted at http://www.icr.org/article/dna-rna-providential-coding-revere/ ).”