For we are not as many, which corrupt the word of God: but as of sincerity, but as of God, in the sight of God speak we in Christ.   (2nd Corinthians 2:17)

Did translators just fail to care?

Check out its history, if you dare! 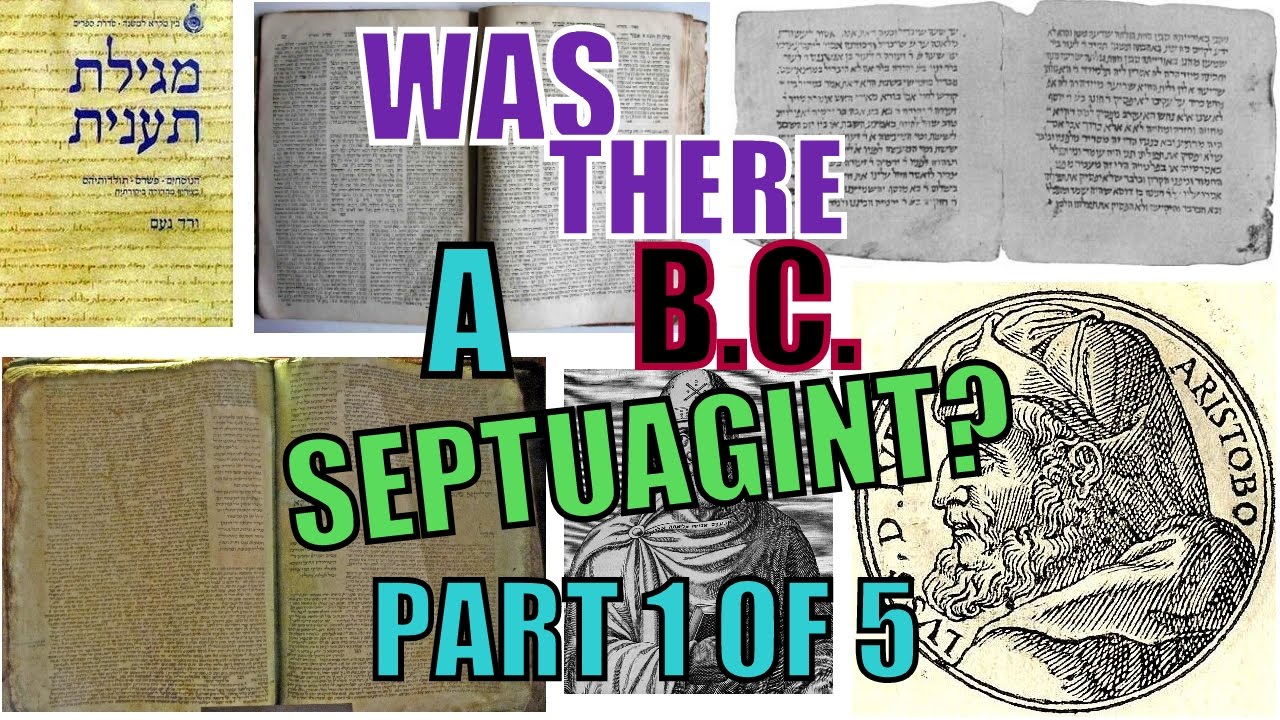 For a surprising report of Biblical text research and forensic analysis, of what is commonly called the “Septuagint” (or “LXX”), check out this journal article:

Also, this book  (by  scholar  David A. Daniels)  is highly recommended:

POST-SCRIPT:  for a limerick regarding how Biblical texts were corrupted and advocated, by Westcott & Hort, and their ilk, see “Critiquing the ‘Critical Text’ Critics”, posted at https://pinejay.com/2019/01/10/critiquing-the-critical-text-critics/ .

God Gave Us the Book of Genesis

In the beginning God created the heavens and the earth.  (Genesis 1:1)

In fact, the Lord Jesus Christ endorsed the books of Moses (which include Genesis) as authoritative, and indicated that we ourselves will be judged by how seriously we respect those Scriptures. [John 3:12; John 5:44-47]

The Hebrew text of Genesis 1:1 teaches us a lot about important facts about creation (which occurred “in the beginning” – not “in a beginning”)—Who, what, when, etc. [Genesis 1:1]

God’s creative works include creating physical stuff form nothing, creating animal nephesh life from nothing, and human spirits (made uniquely in God’s image) from nothing, as well as His creative shaping of physical stuff into physical bodies of humans, animals, plants, and other object on Earth and in the heaven – as well as His redemptive work of regenerating sinners who trust in Christ for salvation.  [Genesis chapters 1 & 2; Psalm 102:18; 2nd Corinthians 5:17]

Creation Week consisted of God creatively working for 6 normal days [yôm in singular; yamîm in plural], followed by 1 normal day of rest (the Sabbath); therefore, the so-called “Day-Age” theory, “Gap” theory, and all other departures from the Genesis cosmogony (of 6 normal days) are errors. [Genesis chapter 1-11; John 5:44-47; etc.]  The Day-Age theory (which includes the “progressive creation” variant of that theory) is false.  Also, the Gap Theory is false.

Theories that evade the historical narrative character of Genesis, such as those which mischaracterize Genesis as if it was “Hebrew poetry”, are false cosmogonies.

Why do many teach an origins story that departs from understanding Creation Week as 6 normal days, followed by 1 normal day of rest (the Sabbath)?   Sadly, this is done just to accommodate secular mythologies.

Yet chronological information provided within Genesis (e.g., Genesis chapter 5) establishes a recent creation history (within an absolute range of 6,000 to 7,000 years of age), regardless of whether genealogies in Genesis are “open” or closed”.  [ Genesis 1-11, analyzed in www.icr.org/article/4124 ]

Theories that impute personification to “nature” (e.g., Darwin’s notion of “natural selection”) clash with the creation account reported in Genesis, because Genesis excludes animistic powers to natural forces.  However, it was God Who did all the “selecting”, for each of us to be (pro)created!

“And as Moses lifted up the serpent in the wilderness, even so must the Son of man be lifted up, that whosoever believeth in him should not perish, but have eternal life.”   (John 3:14-15)

So, how does this provide a “snake connection” to the meaning of John 3:16?

The Bible portrays serpents as sinister and even devilish reptiles, especially the serpent which Satan embodied when he tempted Adam and Even (in the Garden of Eden),  —   so how can serpents (such as the king cobra) demonstrate God’s glory?

Consider the unusual role that serpents have in God’s creation. The first serpent specifically mentioned in the Bible is the one that Satan used, as his mask, for talking with Adam and Eve, in the Garden of Eden.  Prior to the Garden of Eden event serpents could walk on legs, but afterwards – as part of the curse God imposed as consequences for that terrible event – serpents were limited to crawling on their bellies (Genesis 3).

Did serpents, and other animals, routinely talk to humans in the Garden of Eden, before the Fall? Does the fact that Balaam’s donkey was enabled to talk to Balaam, later in history (after the Jews exited Egypt under Moses’s leadership), an indication that animals were originally able to converse with humans, but now are not?  Scripture does not explicitly tell us the answer, one way or the other.

Meanwhile, serpents – what we call “snakes” cannot now walk on legs, and they are a continuing reminder of what happened in the Garden of Eden (and the seriousness of sin), thousands of years ago.

Apart from that unusual role that one serpent once had, in the Garden of Eden, we see that snakes are reptiles that God created, cold-blooded (“ectothermic”) predators, capable of great subtlety and viciousness.

Earth has many kinds of snakes today, from huge snakes like pythons of the Amazon River rainforest, to small “harmless” Rough-earth Snakes that live mostly underground (unless heavy rains flush them out of the topsoil).

The King Cobra (a/k/a “hamadryad” snakes) are the world’s longest venomous snake, meaning that this snake puts out a poisonous toxin (which is squired form openings in its fangs) when it bites a victim.  Humans easily die of cobra bites, unless a counteracting anti-venom remedy is immediately applied.  As the victim succumbs to the venom’s destructiveness the snake swallows the victims, if the victim is small enough for the cobra to swallow it. The venom is mostly a mix of painful neurotoxins that destroy the central nervous system, ruining vision, balance, alertness, and the brain’s control of the ability to breathe – quite a metaphoric picture of how sin ruins, cripples, incapacitates, and can ultimately destroy the life of a human, if a sufficient remedy to the venomous snakebite is not timely applied.

For human sin there is only one remedy, the substitutionary death of the Lord  Jesus Christ, Who died on the cross for our sins (i.e., receiving punishment as our substitute) – if, as, and when a human accepts this wonderful fact he (or she) receives God’s saving grace, the antidote for sin’s consequences.

The Bible’s first prophecy of Jesus, as the sin-defeating Messiah, was given in Genesis 3:15, when God was addressing the serpent in Eden:

“And I will put enmity between thee and the woman, and between thy seed and her seed; He Himself [i.e., Woman’s seed = Jesus] shall bruise thy head, and thou shalt bruise His heel.”

This prophecy (called the “Protevangelium”) was fulfilled by Christ when He was crucified, because the Lord Jesus’s substitutionary death on the cross actually defeated the power of both sin and death, as is explained by Paul in 1st Corinthians chapter 15.

Interestingly, the comparison that Jesus Himself used, when explaining eternal life to Nicodemus, referred back to an incident involving snakes:

That strange event, which Jesus referred to, is reported in Numbers 21:4-9, which says:

And they [i.e., the Israelites] journeyed from mount Hor by the way of the Red sea, to compass the land of Edom: and the soul of the people was much discouraged because of the way.  And the people spake against God, and against Moses, Wherefore have ye brought us up out of Egypt to die in the wilderness? for there is no bread, neither is there any water; and our soul loatheth this light bread.

And the Lord sent fiery serpents among the people, and they bit the people; and much people of Israel died.

Therefore the people came to Moses, and said, We have sinned, for we have spoken against the Lord, and against thee; pray unto the Lord, that he take away the serpents from us.

And Moses prayed for the people. And the Lord said unto Moses, Make thee a fiery serpent, and set it upon a pole: and it shall come to pass, that every one that is bitten, when he looketh upon it, shall live.

In other words, if we think of Jesus Christ dying on the cross (crucified for our sins) as our substitute, as we believe God’s promise (in John 3:16) that we will be graciously cured of our sin’s consequences as a miraculous gift He generously gives us due to Christ being our Savior   –   we too receive God-given life, but not just receiving an extension of our earthly life (cured of earthly snakebites), but rather receiving the forever-permanent gift of eternal life (forgiven all our sins!).

So how is the Lord Jesus Christ, when He was on the cross, comparable to the copper snake-on-a-pole that Moses erected (Numbers 21:4-9), as part of God’s solution to the snakebite crisis in the wilderness?   Christ voluntarily and graciously accepted the curse and punishment of our sin, and was nailed to a pole-like cross, as He exchanged our sin for His own righteousness:

For He [God the Father] hath made Him [Christ Jesus] to be sin for us [human sinners], Who knew no sin [i.e., Christ Himself was personally sinless in His humanity]; that we [human sinners] might be made the righteousness of God in Him [i.e., in Christ]. (2nd Corinthians 5:21)

So snakes should remind us of God’s gracious redemption in Christ, to save us humans from the consequences of our sin, and we should be mindful that God first promised this redemption in Genesis 3:15, and it was later explained by the Savior Himself, in John 3:14-15 (which alludes to Numbers 21:4-9).