‘Again, the kingdom of heaven is like unto treasure hid in a field; the which when a man hath found, he hides, and for joy thereof goes and sells all that he hath, and buys that field.’ (Matthew 13:44)

In a controversial ruling earlier this month (May 20, 2020), the Montana Supreme Court has finally settled the issue—earlier litigated in federal courts—of who owns a buried dinosaur fossil, when a landowner sells the real estate (i.e., the land called the “real property”) that physically contains the fossilized dinosaur—yet does so with a reservation of “mineral” rights.(1),(2)

However, before describing the Montana Supreme Court’s ruling, consider the context of the controversy.

What are “mineral rights”? Americans are accustomed to the idea of reserving mineral rights, such as when a landowner sells land while retaining the legal right to drill for (and own) any buried oil and gas, and/or retains the right to mine (and own) any gold, silver, copper, coal, or uranium.

But what about subsurface fossilized dinosaurs? Are they, legally speaking, “minerals” that are “retained” when a landowner sells the surface estate (i.e., the topsoil, trees, house and out-buildings)—while “reserving” (i.e., withholding) ownership of the subsurface “mineral” rights?

In other words, are subsurface dinosaur fossils included within the legal (property law) category of “mineral rights”?

Generally speaking, legal categories for property law topics are defined by state law, not federal law. Accordingly, the more specific question—for a fossilized dinosaur dug up in Montana—is whether dinosaur fossils are “minerals” as a matter of Montana property law.  That means Montana law may differ, in answering that legal question, from how Texas or Oklahoma or Colorado would answer that question. 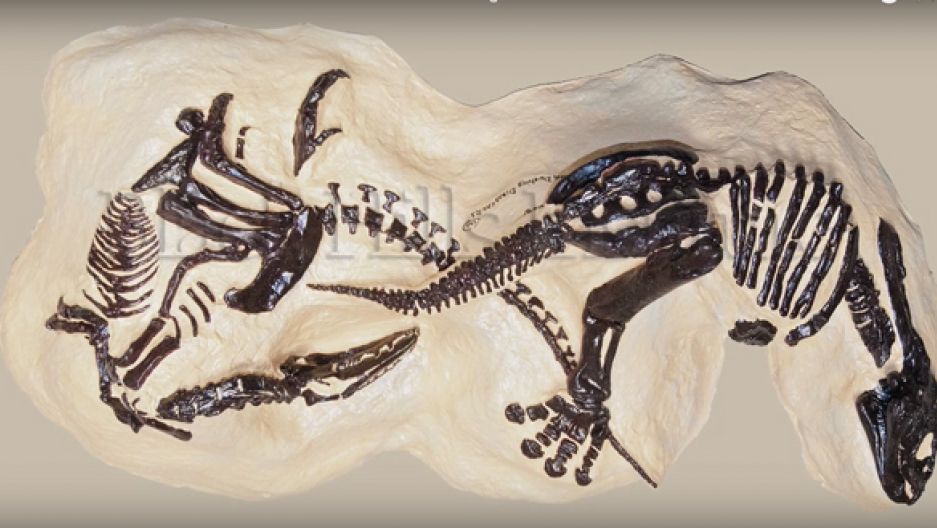 This very problem was adjudicated, a couple years ago, in a case called Murray v BEJ Minerals LLC, involving a famous dig-site for dinosaur fossils, the Hell Creek formation of Montana.

In 2006, an amateur paleontologist uncovered the well-preserved fossils of the “Dueling Dinosaurs” on a Montana ranch (“the Ranch”) in an area known as Hell Creek. Lige and Mary Ann Murray (“the Murrays”), the plaintiffs in this action, own the surface estate of the ranch where the fossils were found. In 2005, prior to the discovery of the fossils, Jerry and Robert Severson (“the Seversons”), the defendants and previous owners of the ranch, sold their surface estate and one-third of the mineral estate to the Murrays. In the conveyance, the Seversons expressly reserved the remaining two-thirds of the mineral estate, giving them ownership, as tenants in common with the Murrays, of all right, title, and interest in any “minerals” found in, on, and under the conveyed land.(1)

The outcome of the lawsuit turned on whether dinosaur fossils, as a matter of Montana property law, were included in the term “mineral rights”. Needless to say, a lot of money was at stake.

The above-quoted court decision, in November 2018, was decided by a federal appeals court (the Ninth Circuit Court of Appeals), stating that Montana was being applied to answer the critical property law question (of whether buried dinosaurs were “minerals” under state law).

Of course, as one might expect for the Ninth Circuit (which has favored evolutionary theory in the past), the appellate decision included reliance upon evolutionary assumptions.

Once upon a time, in a place now known as Montana, dinosaurs roamed the land. On a fateful day, some 66 million years ago [sic—error in the original], two such creatures, a 22-foot-long theropod [Tyrannosaurus rex] and a 28-foot-long ceratopsian [a Triceratops-like dinosaur], engaged in mortal combat. While history has not recorded the circumstances surrounding this encounter, the remnants of these Cretaceous species, interlocked in combat, became entombed under a pile of sandstone. That was then … this is now.(1)

The Ninth Circuit Court of Appeals, in their ruling, decided that Montana law would recognize the dinosaurs fossils, when buried in the ground, as “minerals”—like gold, silver, coal, or petroleum.

Is this legal controversy one that paleontologists, and other people interested in finding dinosaur fossils, would care about? Yes, this is a very practical question for those who want to dig for dinosaur bones.

Excavating a dig-site when fossilized dinosaur bones are found—in Montana or anywhere else—can be a laborious and expensive exploration. Suppose a paleontologist crew negotiate a deal with a landowner, to dig on his property for dinosaur bones, and get written permission—some kind of signed contract—for rights to the dinosaur fossils if, as, and when they are recovered from under the topsoil.

Suppose further that dinosaur fossils are dug up. The dinosaur-dig crew may think they have a legal right to keep the fossils—if the landowner signed an agreement saying as much.

But what if after that, to the fossil-finders’ surprise, someone shows up and claims the dinosaur fossils, saying: “Thank you very much for carefully excavating my dinosaur bones—I’ll take them now—because when I sold this land, to its present owner, I retained the subsurface “mineral rights” so I am the legal owner of what you dug up!”

So, based upon the Ninth Circuit’s 2018 ruling, it would seem that the owner of the subsurface mineral estate owns any valuable dinosaur fossils—if any are ever excavated.

But that was then … this is now.

The Montana Supreme Court has ruled to the contrary, in the same case—overruling the Ninth Circuit decision—via what is called a “certified question” disposition.

On May 20, 2019, the United States Court of Appeals for the Ninth Circuit issued an order pursuant to M. R. App. P. 15, certifying to this Court a question of first impression under Montana law:

Whether, under Montana law, dinosaur fossils constitute “minerals” for the purpose of a mineral reservation?

We entered an order on June 4, 2019, accepting the certified question as written. We observe the importance of the state law question, the public policy ramifications, and the need for clarity in the law governing similar and subsequent property interest disputes in Montana. ¶2 We conclude that the answer to the question is no.  …   Given the overwhelming authority showing “fossils” and “minerals” are separately accounted for under Montana law, we conclude that the terms are mutually exclusive as used in the mineral deed between the Murrays and BEJ. The Murrays, as owners of the surface estate, maintain ownership of any interests not reserved by BEJ in the general mineral deed.(2)

The explanation consumes 46 pages, but the bottom line is that subsurface dinosaur fossils are not deemed “minerals” under Montana state law, because Montana laws generally treat fossils as a category qualitatively different from what are customarily understood as “minerals”.

The technical meaning of a legal term is important—especially if you are digging up dinosaurs on someone else’s land. Meanwhile, now the Ninth Circuit will know how, in the future, to properly apply Montana law to dinosaur fossils.

It would also behoove the Ninth Circuit to discard its uniformitarian-based (“deep time”) evolutionary mythology assumptions about when (and why) dinosaurs lived, died, and became fossilized in what is now Montana.(3)

If those judges are seriously interested in the truth about dinosaurs, in Montana and elsewhere, they need to acquire two science-rich books authored by Dr. Tim Clarey: Dinosaurs, Marvels of God’s Design and Carved in Stone, Geological Evidence of the Worldwide Flood.(4)