When Galileo was Put on Trial, Who was Right? 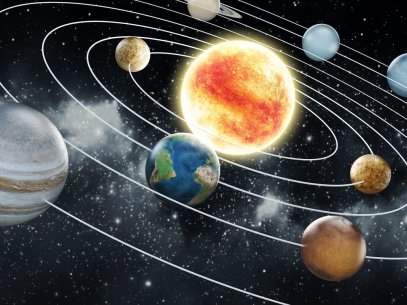 The heavens declare the glory of God; and the firmament shows His handiwork. (Psalm 19:1)

Galileo Galilei, in AD1633, faced hostile Inquisitors who threateningly opposed his astronomical discoveries.  Galileo taught that Earth moves around the sun, while the sun stays “stationary”, but his opponents taught vice versa, and put Galileo on trial for “heresy”.(1) This historic confrontation is often labeled as a “religion-versus-science” trial, because it involved a disagreement about what Psalm 93:1 teaches — and it came close to getting him killed!  (Yet, as shown below, the odd conflict was a display of both sloppy religion and sloppy science.)

The Lord reigneth, He is clothed with majesty; the LORD is clothed with strength, wherewith He hath girded Himself: the world also is stablished, that it cannot be moved.

The latter part of Psalm 93:1 allegedly clashed with Galileo’s analysis of our solar system. Why? Galileo’s telescopic measurements of movements in the heavens (i.e., sun, moon, planets, etc.) “proved” that it was Earth that “moved” (i.e., regularly cycled) around the stationary sun, not vice versa! However, Roman Catholic interpretations of Scripture, during AD1633 (in Italy, where Galileo lived), disagreed with Galileo’s astronomic analysis.(1)

Actually both sides were part wrong, because both sides relied on errors:

(a) both the sun and Earth are moving, in very predictable orbits, yet when described contextually, both are moving in relation to one another (and to the Milky Way galaxy, as well!)—plus all motion must be described with respect to a frame-of-reference (i.e., relative motion), anyway, so it is most practical for observers to use their own positons as the standard locational indices;(1),(2) and

(b) the Hebrew phrase translated “it cannot be moved”, in Psalm 93:1, means that Earth cannot be yanked away from its divinely prescribed (“established”) program of movements—as opposed to describing a state of absolute motionlessness.(2)

The lesson? When “religion” clashes with “science”, expect to see examples of sloppy religion (inaccurate Bible interpretations), or sloppy science (inaccurate scientific observations and/or analysis), or both.(3)

But this is not new. During the heyday (AD1700s-AD1800s) of the so-called “Enlightenment”, there flourished a fad called deism. Deism was—and still is—an “free-thinking”-dominated theism that exalts human reason (ignoring how fallen reason really is) while keeping the Bible closed whenever “science” is discussed.

Prioritizing popularity with secular culture, deists strive to retain some (sometimes many) aspects of Biblical Christianity—but the ecumenical deists’ fondness for unbiblical compromise unbalances and over-tips their epistemological boat, eventually sinking their ship under an ocean of self-contradictions.

Accordingly, deism was (and is today) artificially “cherry-picking” fashionable Bible teachings, while ignoring and discarding other (undesirable or inconvenient) Biblical teachings.(1)  How so?

Consequently, in their reckless haste, to favor humanistic “science” over the authoritatively accurate and relevant Scriptures, deists (including IDM deists of today) illegitimately employ straw-man caricatures of Biblical truth, erring — like Sadducees — because they ignorantly under-value both the holy Scriptures and the power of God (Matthew 22:29).

Dembski: Yet, during that time [of Galileo’s trial, for teaching heretical science], church teaching also held that the earth was stationary.

Unfortunately, this [ecclesiastical error] is because they kowtowed to the prevailing Aristotelian science of the day, which included the Ptolemaic cosmology. …

Dembski: Psalm 93 [verse 1] states that the earth is established forever and cannot be moved. … A literal interpretation of Psalm 93 seems to require geocentrism.(4)

Pity Galileo. If only he had today’s Newtonian astrophysics (and geokinetics), a good Bible concordance, and a Bible in his own language!  Galileo could have seen that the  Bible’s descriptions of God’s choreographed heavens are corroborated—not opposed—by true science.